Skip to the content
Berta Cáceres, Presente!
Hear the Cry of the Earth, the Spirit of the River, and the Cry of the Poor
U.S. Religious Delegation to the Funeral of Berta Cáceres
Please add your Name & Solidarity:  Click here
“Hear both the cry of the earth and the cry of poor.” – Pope Francis, Laudato Si’, 49.
“Berta:  You are present in the soul of our rivers and in the spirit of our birds.” -3/3/16 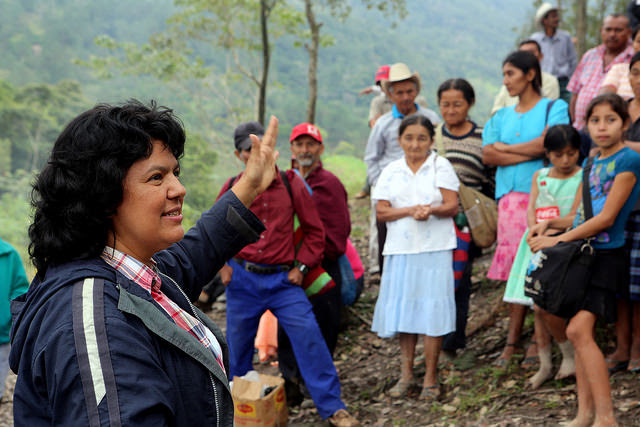 On the night of March 3, Honduran environmental and indigenous leader Berta Cáceres was brutally murdered in her home. As co-founder of the Civic Council of Popular and Indigenous Organizations of Honduras (COPINH), Berta had led the Lenca indigenous communities to fight for the integrity of their indigenous territories.  She was a 2015 recipient of the Goldman Environmental Prize, awarded each year in recognition of the courageous efforts by persons from around the world to defend and protect the rivers, forests and lands from devastation due to destructive practices of governments and transnational corporations.
For years, Berta and the Lenca communities fought to block the Agua Zarca hydroelectric dam.  She had been persecuted and received numerous death threats for her work.  Her murder is one of over 100 unprosecuted murders since 2010 of organizers working to defend the lands and rivers so that the Honduran people can have sustainable opportunities and not have to migrate. 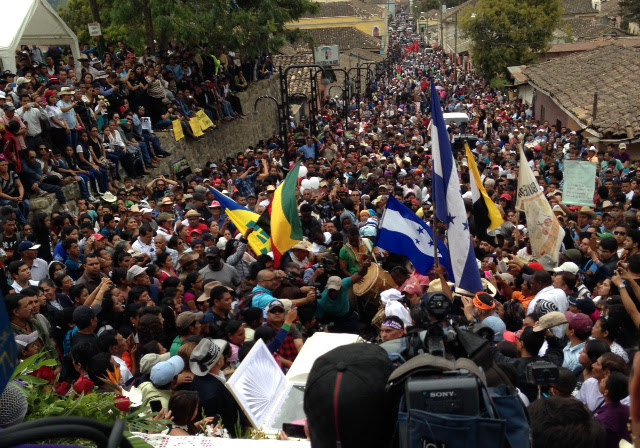 As representatives of faith communities in the United States, we traveled to La Esperanza, Honduras for the funeral to express our solidarity and respect for her, her family and Lenca communities. We join our voices with the many environmental and human rights organizations, and faith communities around the world to protest her murder and to commemorate her extraordinary witness in defense of life, and for the protection of the sacred rivers, forests, lands and communities from further desecration.

Thousands gathered in her home town for the funeral in an incredibly moving display of tribute to her life and an equally passionate cry of indignation at her murder, which many believe is linked to the transnational hydroelectric and mining companies which affect nearly half the territory of Honduras. Since the 2009 military coup, a culture of impunity, violence and racism reigns, which targets indigenous and Afro-descendant communities when they protect creation from further destruction.
We stood alongside Fr. Ismael Moreno Coto, SJ and other religious leaders who have accompanied the struggle to defend Mother Earth, La Madre Tierra. 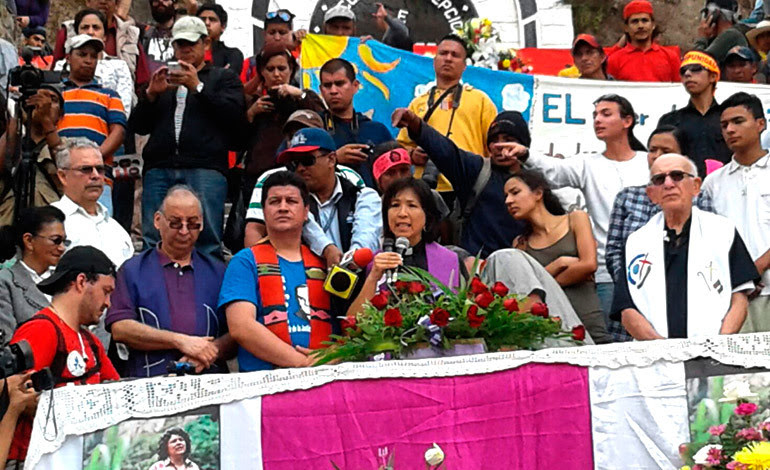 We join our voices to the call issued by Berta’s family, by COPINH and the Lenca people she defended, by environmental and human rights organizations in Honduras and around the world, and communities of faith for:
1.  An exhaustive, independent and international investigation into Berta’s murder, and those responsible be brought to justice;
2.  An end to the D.E.S.A.-backed Agua Zarca hydroelectric dam, and hundreds of concessions to corporations for mining and hydroelectric projects, tourist development and agribusiness that ignore the rights of indigenous and other affected communities to prior consultation, destroy the environment, and displace entire communities from their ancestral lands.
3.  An end to the intimidation and attacks targeting COPINH and other activists, human rights defenders, and all who exercise their right to peacefully protest and work for a more just society.
4.  An immediate end to all U.S. assistance to Honduran security forces, as it contributes to the climate of violence, corruption and impunity; and an end to U.S. support for the Alliance for Prosperity, which promotes large scale infrastructure projects that benefit corporations, but fails to address the structural problems of poverty.
5. Guarantee the physical integrity and safe return to his country of Mexican environmentalist and journalist Gustavo Castro Soto, who was a witness to the attack on Berta. Gustavo works with Otros Mundos Chiapas and the Mesoamerican Movement against Extractive Mining.
A Call for Faith Solidarity:
We appeal to all people of faith and conscience to stand in solidarity by:
Hear the Cry of the Earth, the Spirit of the River, and the Cry of the Poor!
Delegation Members:
Rev. Deborah Lee, Interfaith Movement for Human Integrity & United Church of Christ
Scott Wright, Columban Center for Advocacy and Outreach
Jose Artiga, SHARE Foundation
Rev. David Funkhouser, Honduras Accompaniment Project (PROAH)
Supporters:
Eileen Purcell, SHARE Foundation Advisory Board & Co-founder Sanctuary Movement
Jean Stokan, Sisters of Mercy of the America – Institute Justice Team
Please Join us and add your Name & Solidarity:
Click here to Add your Name
For questions or more information, contact: Rev. Deb Lee, dlee@im4humanintegrity.org