Interfaith Movement for Human Integrity joined a national campaign #diapersnotdetention by organizing a prayer vigil at the Federal Building in San Francisco and delivered 100 signed diapers to Rep. Nancy Pelosi. The messages about liberating the families and closing detention centers were written by people of different faiths. This action was in solidarity with 3,000 mothers and children refugees from Central America who have been detained in prison-like facilities for an unnecessarily prolonged time. Recently, 22 mothers have been on a hunger strike at Berks County, PA family detention center as a response to the Secretary of Homeland Security, J.  Johnson’s comment, that the maximum stay for families in detention centers should be 22 days or less.

At the federal building in San Francisco, faith leaders held a prayer vigil and shared their reflections, “We are not politicians, much less the powerful of the system; we are men and women of faith and of family, the faces of those who have been deprived their freedom, their voices and their heartbeat of their hope”. The visual of the diapers made people chuckle, especially when they saw that a small brown paper was inserted in the diapers that said “BASTA” “ENOUGH”. Nonetheless, the diapers are symbolic for the basic needs of children that mothers need to take care of their children. They represent the morally just attitude that the federal government of the United States should have towards asylum seeking families, which is of caring hospitality instead of criminalization. 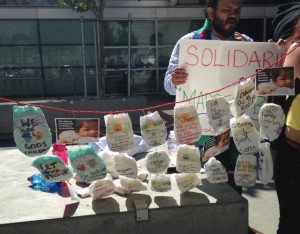 Afterwards, we entered the federal building and dialogued with the staff of Rep. Pelosi as people of faith, we spoke on the moral obligation to protect and welcome vulnerable women and children fleeing violence and seeking protection. Concretely, we asked that she use her influence with President Obama and Sec. J. Johnson to terminate the 3 family detention centers and immediately release all the women and children. Also, to curtail the approach of enforcement policies to support bills in Congress that address the root causes of migration from Central America. The staff listened to each person and we listened to them explaining that Rep. Pelosi has signed a letter, along with other congress men and women, that expressed dissent and urgent demand to end the detention centers that was addressed to Secretary Johnson.  Finally, our presence at the federal building was conscientious effort to hold the U.S. federal government accountable the day after President Obama gave a final address at the historic United Nations Summit on Refugees and Migrants. He said, “At this moment, we all face a choice. We can choose to press forward with a better model of cooperation and integration. Or we can retreat into a world sharply divided, and ultimately in conflict, along age-old lines of nation and tribe and race and religion.”  IM 4 Human Integrity chose to organize this public demonstration and prayer vigil believing that it can be a non-violent model for all communities of faith to integrate our belief of honoring the dignity of all people, regardless of their immigration status.