In every generation there are moments that define the meaning and purpose of our lives.  There are events that demand our attention.  There are people who are desperate and too often left destitute.  Each instance puts us in touch with our humanity, conscience, and faith.  Now is such a time that beckons our presence and cries out for our voices to be lifted on behalf of the most vulnerable and wretched souls who dearly need us.

We are reminded of eras past in which our predecessors were put to the test when critical need resulted in prophetic witness.  They did not wish for such strenuous and undesirable circumstances that put human beings at risk because some arbitrary distinction or determinant factor made them different.  Yet, they stood up and spoke out for the weary and broken hearted who had few options.

Now, here we are today facing similar threats to our sisters and brothers of many hues and features and faith traditions who are placed in the cross hairs of edicts and executive orders intended to round them up and rout them out.

We in the Interfaith Movement for Human Integrity recognize our religious duty to listen carefully to anyone who moans and groans out of despair and fear.  Whenever a person, community, or group says a policy, practice, action, or any means of removal and discomfort “hurts,” then we must heed their calls and not dismiss, ignore, or in any way diminish their aches and suffering.

We must never forget the insightful reflection of Pastor Friedrich Gustav Emil Martin Niemöller in 1946 when he recalled the passive presence of people who witnessed the horrors of extreme, egregious conduct carried out against the victims of Nazi Germany.  In a brief poem presented to the Confessing Church, he wrote:

When the Nazis came for the communists,
I remained silent;
I was not a communist.

When they came for the Jews,
I remained silent;
I wasn’t a Jew.

When they came for me,
there was no one left to speak out.

To believe such demonic conduct could never happen here in the United States is a grave misunderstanding and re-interpretation of this nation’s history.  Indeed, we have seen and known too well the genocidal consequences inflicted on Native Americans whose lands and natural resources were so greatly desired, they suffered the brute force of death and departure.

Involuntary migration over centuries of slavery and forced labor without compensation to African peoples and no significant consequences for those who enforced inhumane laws and benefitted from the trade and displacement of human beings represent the extent to which profit over people set the priorities of this government.

Lest we forget the harsh travails of Chinese workers who broke their backs laying rails to expand the country’s reach from coast to coast (East to West); the Filipino farm workers who toiled in the fields of Central California without labor protections; the Irish and Polish immigrants who experienced a hostile reception upon arrival along the Atlantic seashore remind us again that race and color did not exclude or remove the cruel treatment of undesired sojourners.

The internment of Japanese Americans for acts they did not commit but were held imprisoned in distant holding grounds away from their homes cannot be ignored when we recount how far this government has gone and continues to go when certain groups of people are singled out and rounded up.

So, now, it is our time as people of multiple faith communities to take a stand that is consistent with our traditions and values based on ancient instructions suited for these days.  We know the persistent bad behavior perpetrated by people against other people is the reason our Sacred Texts were written and have survived eons of human history.

We continue to observe the traditions that guided our ancestors and religious predecessors to manage their responses to the hurtful realities presented to them.  What are we called to do today in the face of threats, assaults, and invasions that cripple the spirit and will of our sisters and brothers who are under duress?

We realize interfaith communities are not exempt from punitive actions meted out by agents and agencies of the government.  We know people in our pews are law-abiding, country loving adherents.  We want to do what is right and just.  There are some things we can do.

First, take time to pray, read, review, and reflect on the stories within our religious traditions that inform us about experiences our religious ancestors endured to shape our faiths.

Second, invite persons who are immediately and directly affected by the bevy of Executive Orders, edicts, policies, and practices and ask them to share their stories with your congregation and community.

Third, become familiar with the Sanctuary Movements in the past and what is taking place today.  Get information and resources from our Website:  https://www.im4humanintegrity.org/sanctuary-resources/

Fourth, begin a discernment process within your congregation about how to get involved or become a Sanctuary Community.  There are different actions to determine which is the most effective: (1) providing shelter to persons or families at risk of deportation; (2) advocating on behalf of persons in the immigration system; (3) accompanying someone who has court proceedings; or, (4) supporting a group or network working on behalf of undocumented immigrants.

Remember, the federal government has cast a very wide net that affects people from all over the world.  Although there are reports only persons who have committed crimes are targeted, the reality is innocent families have been terrified by law enforcement personnel. Innocent people have been detained at airports or re-routed in midair.

Today, we may feel safe because we may not be targeted for arrest, detention, or deportation. But, just as Pastor Niemöller witnessed and realized if anyone is taken away for causes justified and sanctioned, it is very possible we will be taken away as well.

Our faith compels us to be in solidarity with human persons whose sacred lives are violated and devalued.  It is necessary to offer sanctuary or provide a safety net to our brothers and sisters who need and depend on us in a time such as this. 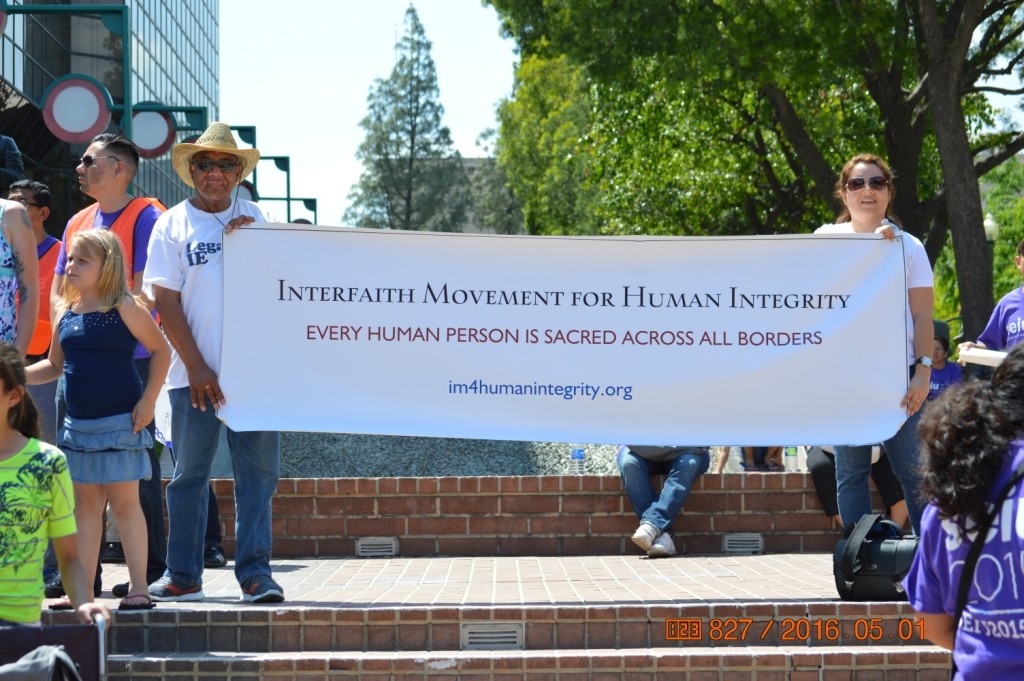