50 faith leaders and social justice advocates from the United States will fly to Honduras on Jan. 24th for a week-long visit to observe continuing widespread civil unrest and protests in the aftermath of the contested presidential election on November 26th. The delegation seeks to an immediate end to the state-sponsored violence, bloodshed and arrests that have been ongoing since the elections; a halt to Honduran military and police attacks on human rights defenders, land activists, journalists and other advocates; suspension of U.S. financial support for the Honduran security forces; and meaningful broad-based dialogue ― with the participation of an international mediator trusted by all involved ― that leads to a peaceful resolution to the crisis.

The ecumenical delegation will include, but is not limited to, representatives of the: Sisters of Mercy from Washington, DC, Omaha, St. Louis; Jesuit Conference of Canada and the U.S.; and a number of other Catholic groups (Franciscan Sisters of Philadelphia/Franciscan Action Network, Maryknoll Office for Global Concerns, Dominican Sisters of Peace, Pax Christi International) well as SHARE El Salvador, Interfaith Movement For Human Integrity, Friendship Office of the Americas, East Bay Interfaith Immigration Coalition, CARECEN, Alianza Americas, Centro Presente, and an array of members from the Lutheran, Presbyterian Church (USA), United Church of Christ, Quaker, and Unitarian Universalist denominations.

The delegation is in response to requests for accompaniment and international presence from prominent Honduran religious partners who have faced recent threats.  The delegation will arrive in Honduras on Wed., January 24th, and will hold an ecumenical event that afternoon, followed by a press conference at the airport in San Pedro Sula. The delegation will also meet with numerous groups and individuals, including members of the Society of Jesus in Honduras, local faith and community organizations, victims of the recent crackdown, and attorneys. On Friday, the delegates will participate with local parishes in a Vía Crucis (Stations of the Cross) procession in Progreso.

Opposition leaders in Honduras have called for a national strike from Jan. 20th to 27th to bring attention to their demands for an end to the violent repression of peaceful protesters, a call for internationally mediated national dialogue that is broadly representative of the Honduran people, and the removal of President Juan Orlando Hernández from office.

Even before election day, the legitimacy of Honduras’ latest presidential elections was questioned by many who noted that the constitution forbids presidential re-election. Incumbent president Hernández stacked the Supreme Court, which ruled (also against constitutional process) that he could proceed with a re-election campaign.

According to OAS (Organization of American States) and EU (European Union) election observer missions, as well as many major media reports, the November 26th presidential election in Honduras was marked by numerous and widespread irregularities, including several cessations in the vote counting after an initial count of 57 percent of the ballots showed opposition candidate Salvador Nasralla with a lead of almost 5 percentage points (the electoral authority claimed the voting trend then sharply reversed, until Hernández was in the lead). After careful review, the OAS called for a new re-election.

The electoral authority’s official announcement that Hernández had won sparked renewed protests that intensified after the election was certified on December 17th and immediately, and prematurely, recognized by the U.S. State Department. More than 30 people have been reported killed, with many hundreds more either injured or detained, and the Honduran government had suspended constitutional rights, giving the army and police additional authority to interfere with and disband protests. Since the election, social justice advocates and religious figures have been victims of harassment and death threats. 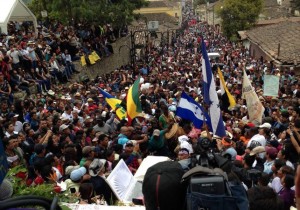