A Message from our Board of Directors 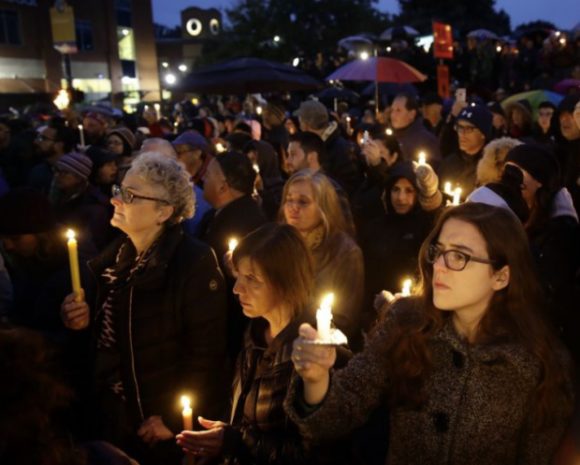 May We Be Steadfast in Our Shared Humanity

As an Interfaith justice organization, we grieve the targeted killing last week of Jewish and African American members of our human family:  11 Jewish worshipers at Tree of Life Synagogue in Pittsburgh, Pennsylvania; and 2 African Americans in a Jeffersontown, Kentucky murdered by a gunman who first tried to enter a black church.

We mourn these precious lives and grieve with their families and loved ones. We understand that this attack is deeply traumatizing to our Jewish friends and partners, given the history of anti-Semitism. These killings are part of a rise in anti-Semitic acts  in the past two years, and have been followed by more anti-Semitic attacks in the past few days.  We want you to know as an interfaith movement that we stand with the Jewish community and we are here for you.

For the African American community, the gunning down of two black people in Jeffersontown is one of thousands of inconceivable murders of African Americans in this country.  This time, once again, a white nationalist targeted black people just trying to live their lives. Black people are targeted while grocery shopping, sitting in one’s apartment, holding bible study, driving, carrying a cell phone,walking, and drinking coffee in a cafe. Just recently here in the Bay Area, Chinedu Okebi, a Nigerian American, was inexplicably tasered to death by law enforcement.  We want you to know that black lives and families matter, and that we commit ourselves to protect the fullness of every black person’s life and stop the impunity.

We are deeply troubled that the gunman in Pittsburgh, echoed the maligning tweets of the President, inaccurately blaming Jewish organizations, like HIAS, for initiating the Central American Migrant Caravan. This “Great Caravan of Dignity,” as asylum-seekers from Honduras call it, has root causes that our interfaith delegations have spent years investigating.

We have learned that the United States bears considerable responsibility for the root causes of migration from Honduras due to our long-standing military and economic support for Honduran political and economic actors who perpetuate widespread human rights violations, with impunity, government collusion with narco-traffickers, and an economic agenda that has sold off mining concessions and natural resources that exacerbates the poverty and violence in Honduras. The militarization of the US border has made migration more dangerous and more expensive, which is another reason why migrants are travelling in large groups. Please read our statement for more information.

Tree of Life Synagogue was a participating synagogue in the inaugural National Refugee Shabbat, organized by HIAS, formerly known as the Hebrew Immigrant Aid Society. HIAS was founded in 1881 to help Jews escaping Russian pogroms. Since then, it has worked on behalf of immigrants, refugees, asylum-seekers, and displaced persons from around the globe.  Just last month, we recognized HIAS at our Angel Island Pilgrimage for their role in aiding Jews detained at the Angel Island Immigration Detention Station.

We see this entwining and maligning of immigrants, blacks, Jews, Muslim, and transgender persons in the last week through violent words, policies and physical harm as the resurfacing of an ugly pattern in our nation’s history.  The President falsely alleged that Middle Easterners and ISIS were embedded among the Great Caravan of Dignity.  Those who are targeted reflect the deep-seated white supremacy and Christian superiority that is endemic to the United States.  The long, legalized history of racial and religious exclusion, subordination and discrimination of minorities is virulently reappearing today.  We recognize that comprehensively and systematically addressing racism is critical to achieving immigrant justice, criminal justice reform and a more just society.

These violent attacks tear at the fabric of our humanity, our human oneness, our human integrity. Our response must be resolute and clear in highlighting our shared humanity and shared vulnerability.  We hope that in this moment you will continue to work with us as we knit together a fabric that binds us together strong enough to withstand this period of hate, violence and fear.

We stand firm on the vision of this country and a world where the life and potential of each one is sacred and across all borders each person is a member of the human family.  May we recommit ourselves to the values and actions of compassion, love, nonviolence, and justice.   May we hold strong to the spiritual values and faith traditions that sustain us and give us hope and joy for the present moment, and the long walk of justice.

We end with this blessing from the first woman rabbi, Regina Jonas, who was ordained as a rabbi in Germany in 1935 and died during the holocaust.  She gave 24 sermons in Theresienstadt concentration camp and was murdered in Auschwitz in 1942.

“Our Jewish people, like all human beings, are sent into history to be a blessing. Wherever one steps, may we generate blessings. May we be steadfast in our faithfulness to goodness, lovingkindness and peace.”

May her words of comfort and inspiration to her people be also a blessing in our lives.