Hello everyone! Our BayUP team would love to thank everyone for gathering with us last Saturday to earnestly pray for our detainees, migrant children, families distraught by the system, and the whole immigration bureaucracy. 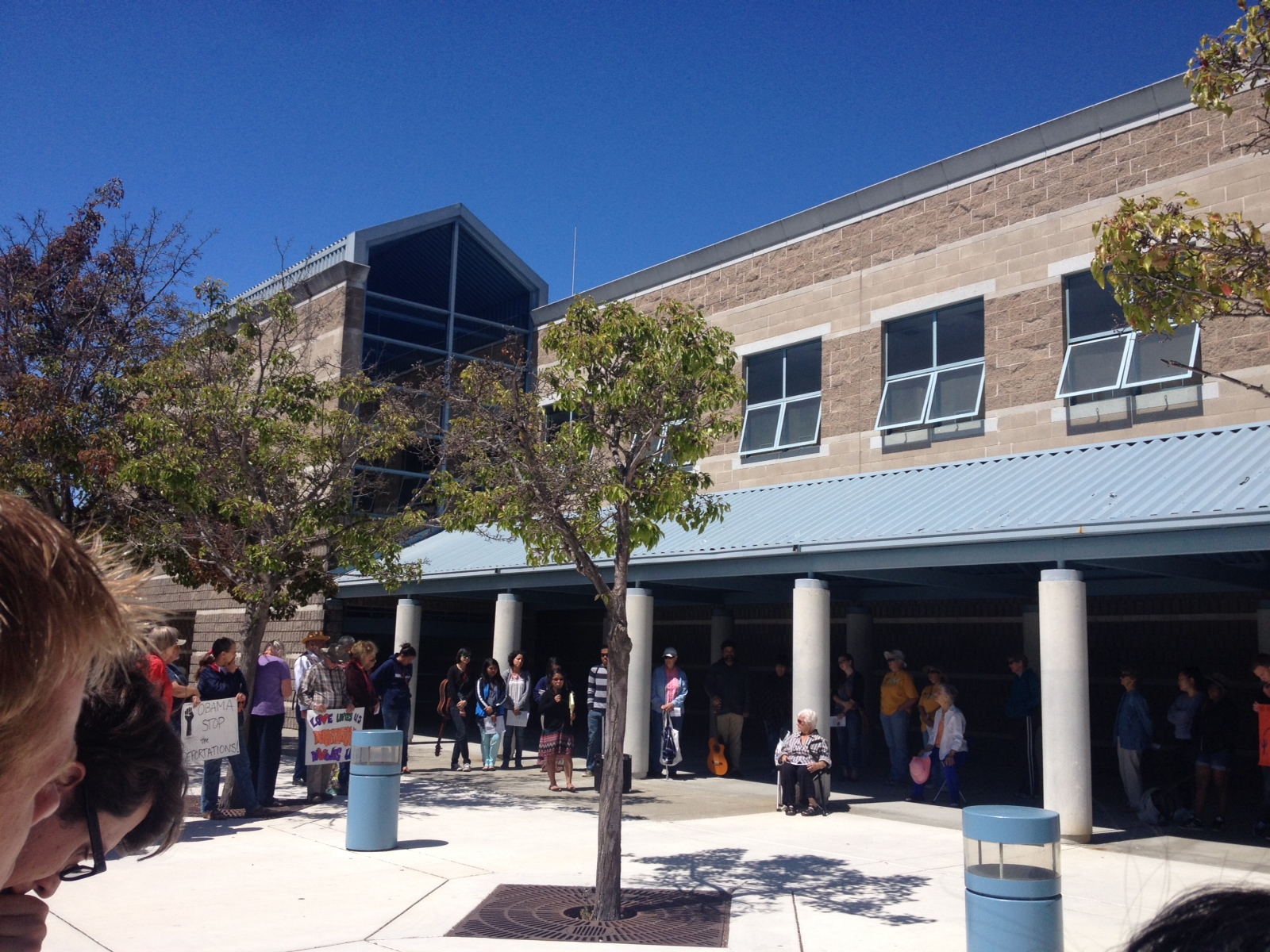 For anyone who was not able to attend, our BayUP (Bay Area Urban Project) team had the honor of leading this month’s prayer vigil. We are college students from different Intervarsity Christian Fellowship university chapters across Northern California and Nevada who convened in Oakland to learn about varying social justice issues through a faith-based perspective. Our team was assigned to work with Debbie for the summer. While we are learning about immigration issues, we are also growing compassionate hearts for those who have experienced the brokenness of the system.

Over the planning process for the vigil, we realized the importance of including people’s stories. Rules and regulations are passed left and right in legislation, and we often fail to hear or appreciate personal narratives that humanize the larger issues.

Our team thought it would be fitting to employ a theme that centers around stories and the way these stories weave in and out with others’ stories. We are all connected by threads that we sometimes do not realize, so we hoped to make those more visible to convict us to become united and interdependent. We were created to be a close-knit community. We were created to be each others’ LIFELINES.

The prayer vigil became a space for realizations, convictions, and the building of new relationships all in the name of immigration justice. We hope that it was “successful” in that it will lead us to become more pro-active in pursuing justice for our brothers and sisters who 1) are trapped within the walls of detention centers, and 2) are suffering from family separation, and 3) are in our communities and cities living with fear of being caught by immigration.

We ask that we all continue to earnestly pray for shalom, the restoration of how relationships were created to be. As the nation awakens to see immigration as an imperative issue, we pray that we all link arms to announce God’s message to the world: to love everyone with no boundaries. Power to you!

Media coverage from April 17, 2014 – SF Footwashing
The purpose of this ritual was to restore honor, respect and solidarity with those families threatened by deportation and I-9 firings, and to call for immediate  executive action to stop the deportations, more permanent just immigration reform.
20 religious leaders of diverse traditions washed feet of impacted families and were assisted by House Dem Leader Nancy Pelosi, Sup. John Alos Supr. Jane Kim, Sup Malia Cohen, Sup. David Chiu, Sup. Scott Wiener and Sheriff Ross Mirkarimi.
Thanks to all the Sponsoring Organizations who helped make it happen:  ICIR-CLUE, SFOP-PIA, SFLabor Council, SEIU Local 87, SF Bay for Immigrant Justice, and FAME (EBASE).
Thanks to all the families and children for courageously telling their stories! 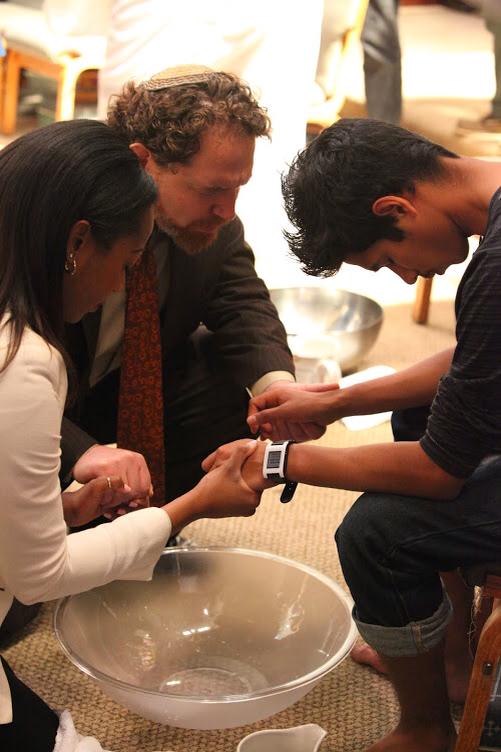 The Stations of the Cross is a Christian tradition from the 15th Century that was started by the Franciscans as a way to portray Jesus’ journey to the cross for people who couldn’t go on pilgrimage to Jerusalem. We have adapted this ancient tradition to help us, in a prayerful way, understand the suffering of The Migrant as he or she is being deported. The Stations of the Cross is traditionally done during Holy Week. We share this resource with you to be freely used for your congregation and communities. 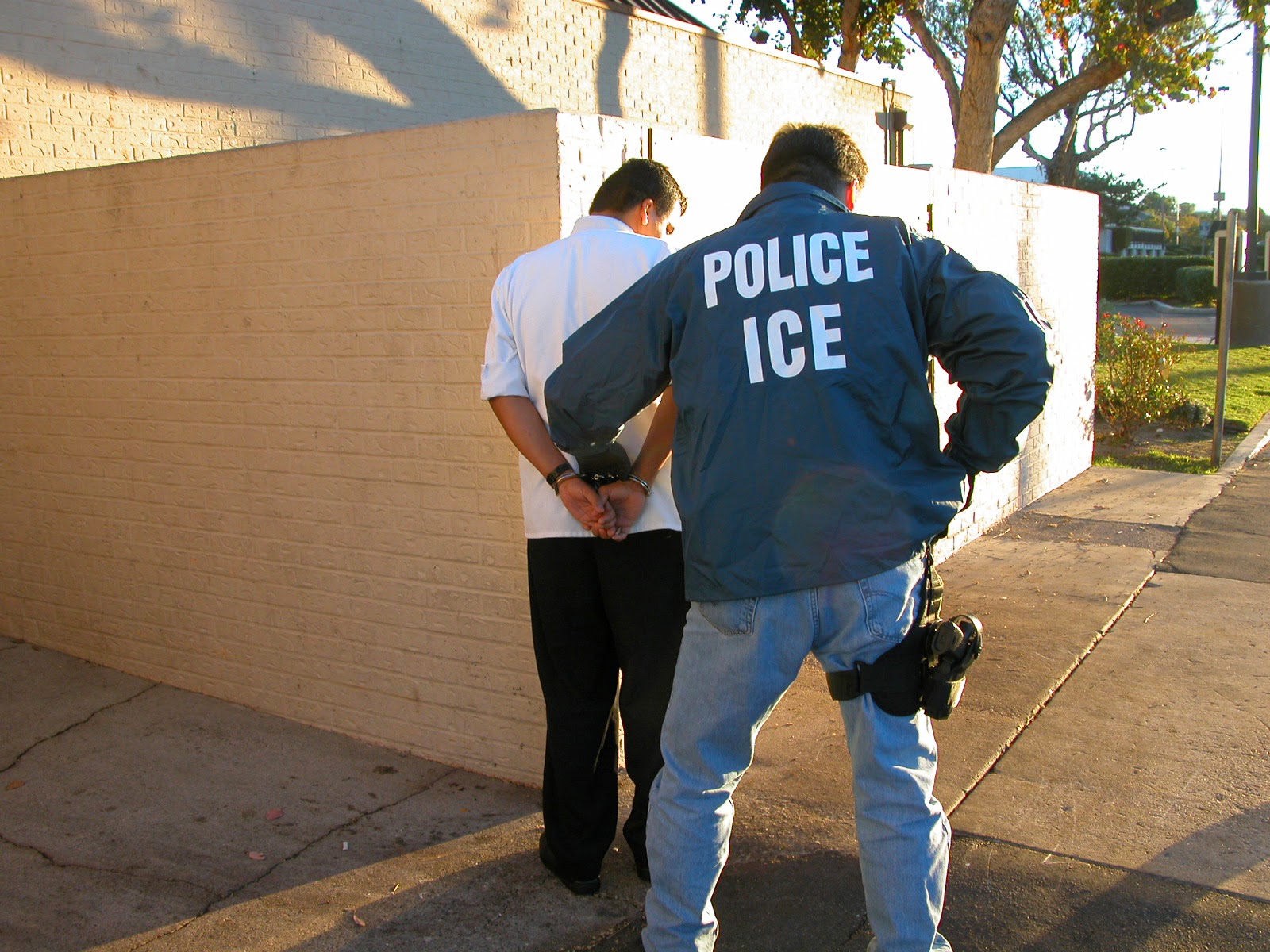 Station 1: The Migrant is Apprehended

There are many ways The Migrant can be apprehended. S/he can be caught crossing the border, or somewhere along the merciless desert in the southern United States. ICE can knock on the door of their home at 6 am, or be waiting for them in their driveway. ICE can come to his or her job. S/he can get handed over to ICE through the program “Secure Communities” from some local law enforcement, even if charges are later dismissed. The migrant feels confusion, fear and anxiety. Why is this happening? What will happen to my kids? What will happen to my job if I don’t show up to work tomorrow? Will they know I’m being taken? The Migrant is now in the jaws of ICE. 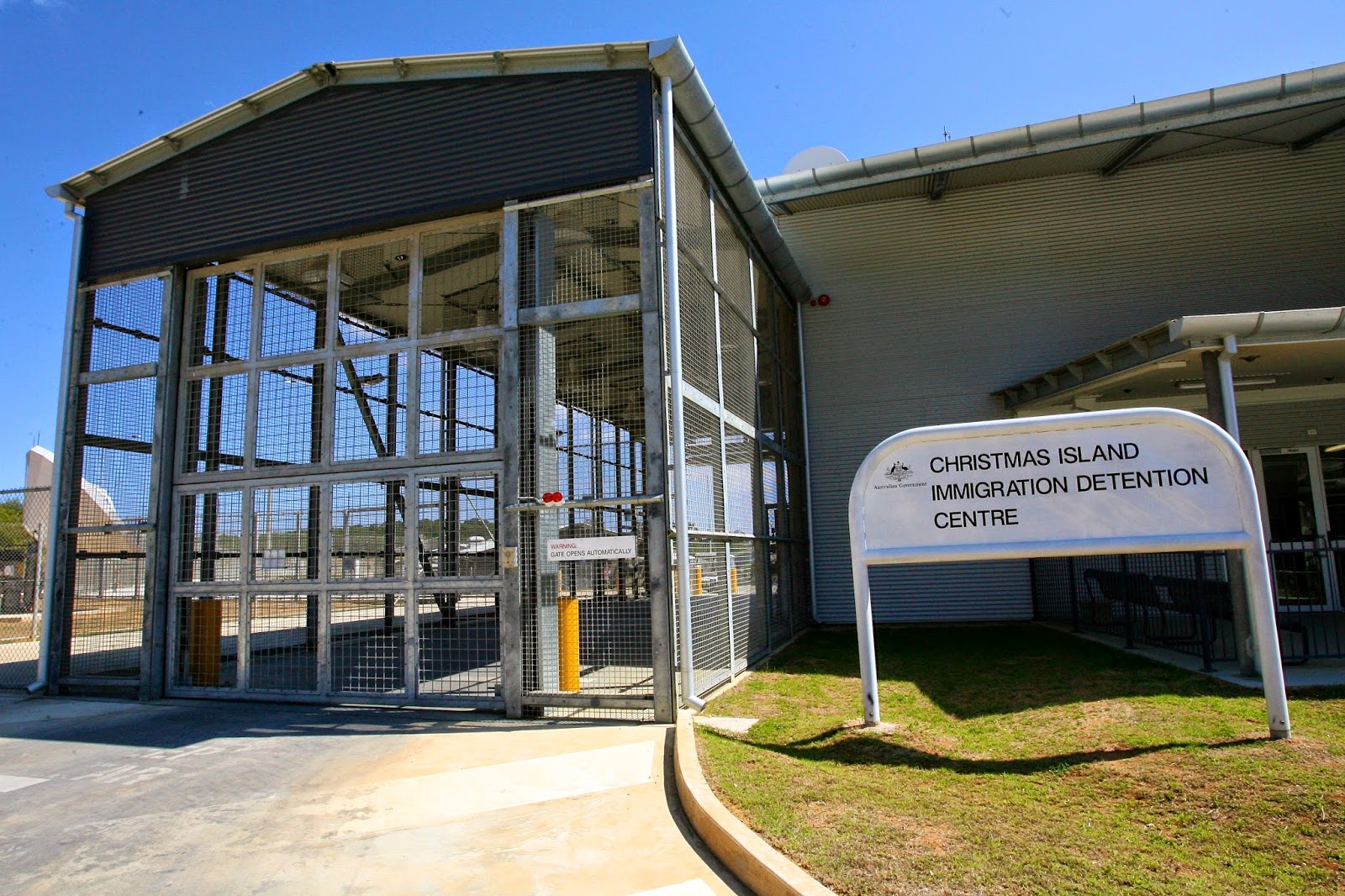 Station 2: The Migrant is Detained

After being apprehended, The Migrant is detained in a prison. They take away his or her clothes, cell phone and other belongings. S/he wonders, what detention center am I in? What state? How will my family find me? The Migrant experiences the poor conditions of imprisonment: locked in a cell for all but a few short “free time” breaks; terrible food, sometimes with bugs in it, the yelling and harsh treatment. S/he feels lonely and ashamed. S/he feels abandoned by his or her friends and family. Sometimes there is abuse from other prisoners, or from the guards. If a complaint is filed, retribution follows swiftly. 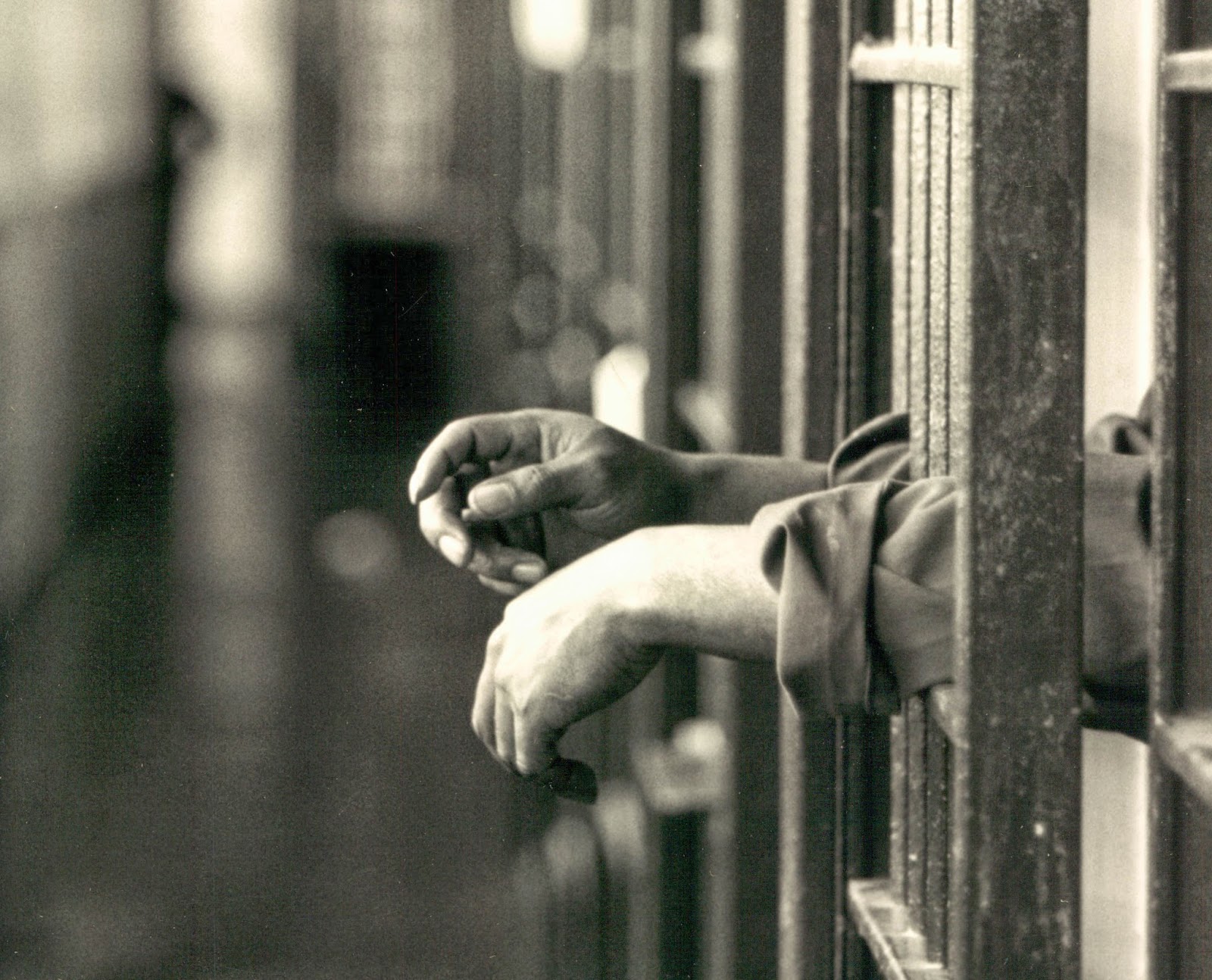 After being apprehended and charged with the apparent “crime” of being a migrant, The Migrant finds themselves waiting and waiting. Days turn into weeks. Weeks turn into months. Just when The Migrant gets used to a place, they are moved miles away to yet another facility. Communication with loved ones is by letter if at all. Phone calls are too costly and infrequent. Even rarer are visits through glass walls, for 30 minutes after a long and costly drive for the family, now impoverished by the Migrant’s languishing in prison. Several times, ICE agents have come to ask questions about his or her friends and family, demanding The Migrant sign a paper of voluntary departure. S/he cannot read it and is not sure what to do. The Migrant most likely does not have an attorney, as 86% of Immigrant detainees go without representation.

Dear God of Hope, we pray for all those migrants in detention. We pray that you give them company in times of loneliness, your Love in times of discrimination, and your hope in times of hopelessness. We pray you bring your justice and listen to the cries of your people who are being treated unjustly in these centers of detention. Amen.

Station 4: The Migrant Goes to his or her Bond Hearing

The Migrant is rudely awakened at 4 am. The Migrant is shackled in three different places: the wrists, the waist and the ankles. The Migrant, with dozens of other migrants, is then put on a bus with darkened and grated windows. The bus ride goes on for five hours.

It has been more than six months, and finally the Migrant is getting to see a judge to see if s/he could be released on bond. If s/he is granted bond, the family will need to come up with $5-10-15,000 for the Migrant to be released. If released on bond, the Migrant will likely wear an ankle bracelet that chafes the skin and requires a long period of time to recharge the battery. But even that would be better than detention.

The judge denies the Migrant bond, stating that the Migrant is a flight risk, unlikely to show up at a future hearing, and most certainly a danger to society. The migrant is dejected and heartbroken of having been denied the right to sunlight, family members, to liberty while waiting further trial. The Migrant travels back on the bus to his/her cell at the detention center, not arriving until midnight.

Dear God of love, we pray for all those migrants in detention who are denied the right to bond, despite what the law says. We pray for those who feel frustration, impotence and despair. We pray that you give them hope in times of hopelessness, a sense of solidarity in times of loneliness, and the strength not to give up despite repeated denials. Amen. 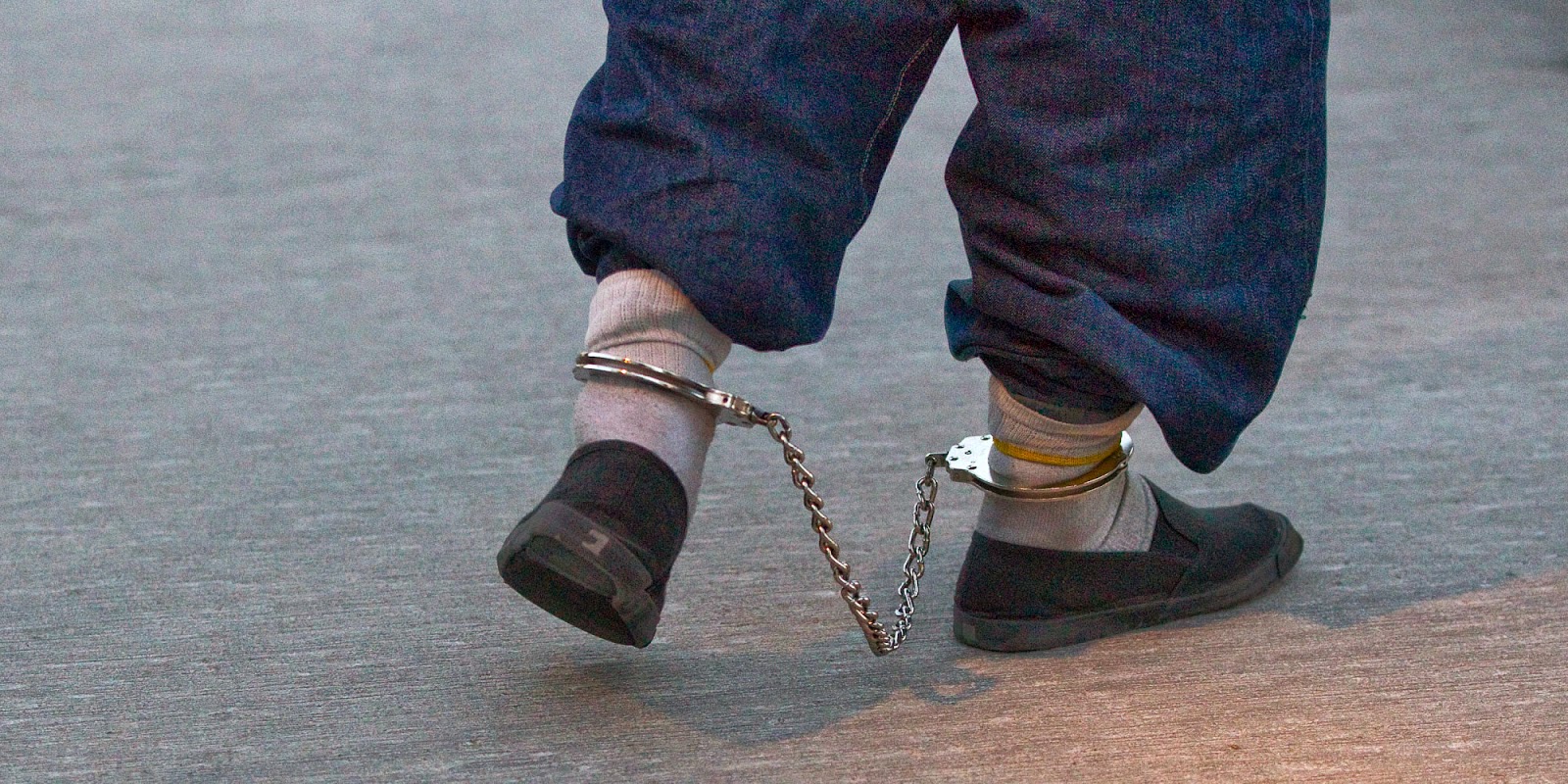 Station 5: The Migrant Goes to Trial

Months, maybe years later, the Migrant is awakened at 4 AM: Again the Migrant is shackled in three different places: the wrists, the waist and the ankles and put on a long bus ride. It’s time for the immigration trial. The Migrant is nervous and worried about how they will represent themselves and what to say. The process is confusing. The Migrant feels helpless to the questions that are asked. The Migrant pleads their case in front of Immigration Judge Anthony S. Murray, one of the toughest in the nation.

Judge Murray denies the asylum case, as he does 86.7% of the time and is ordered deported.

Dear God of justice, we pray for all migrants standing trial today. We pray your hope and mercy over them in the midst of all their fears and trials. We pray for all judges dealing with their cases, that they may be able to see Your dignity in them and the Migrant’s true value. Amen. 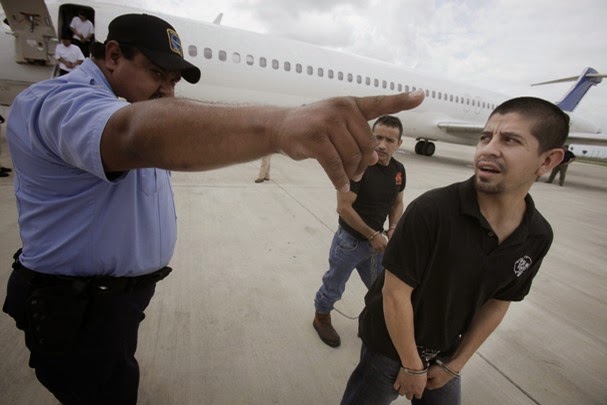 Station 6: The Migrant is Deported

The Migrant is deported. He or she arrives to The Migrant’s place of birth, to a land changed since they last stepped foot in it. The Migrant has no money and only the clothes on his or her back. The Migrant feels deep grief and despair at being separated from his or her family and loved ones. The Migrant didn’t even have a chance to say goodbye. At arrival, he or she sees news camera as they report “the new plane carrying deportees from the U.S.” The Migrant lowers his or her head in shame at the cold welcome.

Interfaith Movement for Human Integrity is a statewide California organization that connects clergy and people of faith to the work of social justice. We work to make the criminal justice system more just, and the immigration system more fair and humane. We are a 501(c)3 organization, tax ID# 91-2076672. We are are non-partisan and are not aligned explicitly or implicitly with any candidate or party. We do not endorse or support candidates for office. We do give Shuumi.