Below is a personal post from our Northern California Director Rev. Deborah Lee. Rev Lee shares with us an account of her experience on our Root Causes Pilgrimage to Honduras and Guatemala and the parallels of the migration journey between crossing the Mediterranean and crossing Mexico. For other personal accounts of experience please visit out blog at: RootCausesDelegation.wordpress.com

The world has been touched by the image of little Aylan Kurdi, the Syrian toddler whose body washed ashore the Mediterranean Sea this week as his family attempted to reach Greece. His mother and 5 year old brother also drowned, adding to the more than 2600 migrants who have died out of 300,000 who have attempted to cross by sea to get to Europe this year.

A completely preventable death if migrants were allowed safe passage so they wouldn’t have to come such dangerous ways. After all, the thousands of dollars migrants pay smugglers is many more times the cost of a one-way plane ticket. Aylan’s family was hoping to eventually get to an aunt in Canada who could offer protection and safety from the bombs barraging their village.

I recently returned from Honduras and Guatemala where we met people like Aylan’s father, family members who have lost loved ones due to unsympathetic and restrictive immigration and asylum laws. 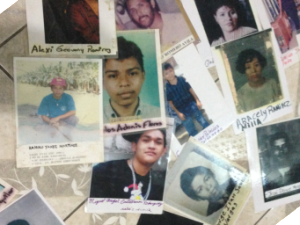 We met Honduran mothers whose children have tragically died on the migrant trail heading for the United States. Even worse for some who have been waiting years, they are not even sure what fate has befallen them and so count them among los disaparecidos/las disaparacidas (the disappeared).

“Mexico takes our children. Like the Mediterranean Sea takes other children,” they told us.

700 cases from Honduras alone. The mothers all can recite the exact date their children left, the last time they heard their voices en route on the phone. They have photographs of each one. All young faces, in their teens and twenties. Some left with toddlers, like Aylan, in their arms.

Many also were potential asylum seekers fleeing violence seeking a lifeline in another place, another country. Others seeking a way to make a living to contribute to and support their families. Killed either in Mexico by organized crime, migration authorities or security forces that prey upon migrants; or dying of thirst crossing the Sonoran desert trying to avoid US Border Patrol.

Immigration doesn’t have to be difficult if we allowed safe passage and had immigration laws that put human life at its center.

Perhaps, looking at the crisis in Europe, we have become desensitized to the image of migrants dying crossing our own southern border. We might forget the avertable deaths of migrants that take place closer to home because of US immigration laws.

And why not? We are seeing less of it, because Mexico is doing our proxy immigration enforcement. To the tune of $86 billion dollars a year, the US is paying the Mexican government to crack down hard on migrants coming through Mexico, conduct mass detentions and deportations, set up more road blocks and even build 12 permanent naval bases to prevent migrants from getting even close to our US borders. All reliant on Mexican security forces with a track record of abuses, disappearances and impunity.

We are making migration even more dangerous and more expensive for those who see no options for their human survival. As the US and Mexico have shut down the land route through Mexico, some may already have to start coming via maritime routes along the Pacific.

It won’t be long before we too might tragically find a toddler washed up on our shores.

**Nearly 50 years ago, in 1966, my mother fled her country of birth, Indonesia, at the beginning of massacres and a genocide that left between 1-3 million people dead. She went to a lifeline, an uncle in Ohio who could offer some temporary safety and protection. How many of our families have a similar story in our history? Who among us wouldn’t do the same, if we could muster the courage and resourcefulness to flee for safety?